Dr. Najat Makki has gained worldwide success and recognition as one of the foremost female Emirati contemporary painters. In 1977 she became the first Emirati woman to earn a government scholarship to study art abroad. She obtained her bachelor’s and master’s degrees in relief sculpture and metal from the College of Fine Arts in Cairo, where she also received her doctorate in the philosophy of art in 2001. She has won numerous awards throughout her career, including the National Award for Arts, Sciences, and Literature in 2008. Dr. Makki has exhibited her paintings in Egypt, France, Germany, India, Jordan, Switzerland, Syria, Turkey, and the United Kingdom. She is a member of the Emirates Plastic Arts Society, Art Friends Society, and the Dubai Cultural Council, among others. Dr. Makki lives and works in Dubai. 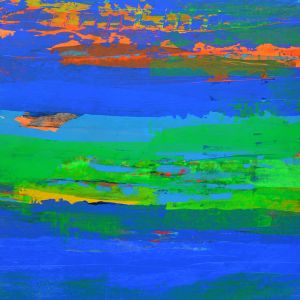 Dr. Najat Makki’s artistic career passed through several stylistic phases over the decades, including realism and abstract expressionism. She developed a technique inspired by modernism as it relates to both her local environment and the human condition. Her work frequently incorporates items from nature, such as saffron, henna, or bark. Often known for her focus on the female figure and symbols, in recent years Dr. Makki has created paintings with a more abstracted look, distinguishing herself from her peers. She portrays an underlying rhythm and spirit through her choice of vivid colors. In Untitled, the artist depicts the sea at sunset from memory. Dr. Makki has said, “My memory is still saving many things, as if it were a dream seeping into my works.”