Maitha Al Mehairbi – a writer, cultural consultant, and visual artist – works primarily in film and mixed media. She holds a bachelor’s degree in communications and media science from Zayed University in Dubai. A number of venues have featured her documentaries, films, and mixed media artworks, including Abu Dhabi Art 2012, Sheikha Salama “Art for All” Community Pavilion, Qasr Al Hosn Festival, Tashkeel gallery, Anasy Documentary Awards, and the Abu Dhabi Authority for Culture and Heritage. Al Mehairbi has previously worked at twofour54, the Abu Dhabi Media Zone Authority. She has contributed writing and photography to The National’s multimedia segment and Al Boom magazine. Al Mehairbi lives and works in Abu Dhabi. 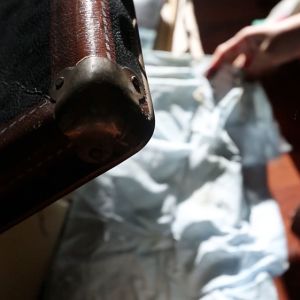 Maitha Al Mehairbi has a fascination with documentation and remembrance, as well as with tangible objects from the past. In her video Untitled, she melds traditional realities with her own imagination and experiments with different methods, techniques, and mediums to recreate her Bedouin grandmother’s world. Al Mehairbi describes the video as a documentary of her mother’s storage trunk, a weathered suitcase that unintentionally became the repository for family heirlooms, many of which are foreign to the artist. Hailing from tribal ancestry – though never having experienced the lifestyle herself – Al Mehairbi admits to having guilt about romanticizing her own past and of having an almost detached, orientalist perspective on her ancestors. Untitled ultimately emerges as the artist’s study of generational loss and intergenerational confusion.