Khalid Al Banna studied architecture and engineering at the United Arab Emirates University in Al Ain. While there, he participated in numerous art competitions, claiming first prize at the university level. On several occasions, Al Banna was chosen to represent the school at competitions abroad. Since graduating in 1997, he has been creating art in numerous mediums – including drawing, printmaking, painting, and sculpture – and is now renowned for his mixed collages and etchings. Al Banna has participated in many exhibitions domestically and internationally, including in Egypt, Germany, Italy, Lebanon, Switzerland, and the United States. He currently lives and works in Sharjah. 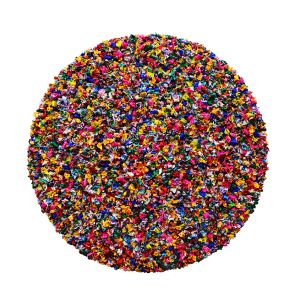 Known for their vivid colors and distinct shapes, Khalid Al Banna’s textile works symbolize the diverse populations in the UAE today. Each type of fabric used to create 2012 represents a different nationality residing in the Emirates. The amount he chooses directly corresponds with local demographics. Al Banna uses bright, multicolored cloth from jalabiya, a traditional dress for Emirati women that is still popular with young girls today. Because Emiratis have witnessed the disappearance of many customs since the UAE was established over forty years ago, Al Banna believes his works help preserve and revive time-honored materials associated with the nation’s heritage. He also intersperses these fabrics to convey the country’s cosmopolitan character.